The Mission of Our Lady of Good Counsel Parish is “to bring our community into a living relationship with Christ.”

We are a Catholic community called by our baptism to be Christ-like by being a light to the world, to celebrate and become the Body of Christ for ourselves and others, to proclaim the Kingdom of God. Our core focus areas are Spirituality, Collaboration, Evangelization, and Stewardship/Accountability.

Having discerned a need for a parish on the west side of Endicott, having been voted on and passed by the Pastor and Trustees of St. Ambrose, from whose parish we emerged, and this new entity having been formally approved by the Bishop of Syracuse, seventy five years ago OLGC was born. It still did not have a church building to worship in. That would come the following year. But the parish as an entity was created. What a profound lesson—that a parish is more than just its buildings or it programs, but rather is its people, people who desire to come together as a community, to worship God, and to be of service in God’s name—and that before we had buildings, programs, or even any property, we were a parish. 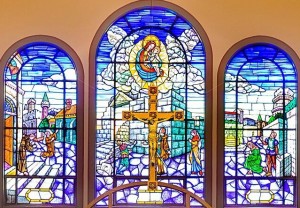 THE STORY TOLD BY THE STAINED GLASS WINDOW

The image now known as “Our Lady of Good Counsel” dates back eight centuries.  Painted sometime in the 1300s in Albania, the image of Mary and the child Jesus holding Mary in a tender embrace was originally known simply as “The Virgin of Scutari” because it was located in a church in the town of Scutari, Albania.  It is noteworthy that the original image shows Jesus with the head shaved, but for a ponytail, and feathers in the ponytail, which is the way the kings of Albania adorned their sons, a sign of the royal nobility of the child Jesus.

After the invasion and defeat by Muslim Turks in 1467, the condition of Christians of Albania was severely threatened.  Churches were destroyed and many were imprisoned for their faith.  Many others fled Albania in search of religious freedom.  Here’s where the story in the window begins.

In the window’s center panel, standing in a piazza before an unfinished church, are two soldiers and and a woman.  The soldiers’ names are DeScalvis and Giorgio.  According to their testimony, they too had decided to flee Albania.  However, on the morning of their departure, they first stopped to pray for safety in the chapel of Scutari, before the image of Mary and Jesus.  Both reported to have seen the image detach itself from the wall, become enveloped in a cloud, and go before them on their journey.  It led them across the Adriatic Sea, to Rome, where they reported seeing this cloud precede them over the walls of Rome and disappear.

Meanwhile in the village of Genazzano, 30 miles east of Rome, a pious woman named Petruccia, (depicted standing next to DeScalvis and Giorgio in the center panel of the window), was widowed at age 39, her husband having been the care taker of the Augustinian Friary there.  After his death, it was revealed to her in prayer, “Mary Most Holy, in her holy image of Scutari, wishes to leave Albania.”  In this revelation, Petruccia was charged with preparing a place for this holy image to come to.  Of course, when she told the town-people of this revelation, she was soundly mocked and received no support for her project.  Petruccia for her part was undeterred.  Using what remained of her inheritance, she received permission from the Augustinian Friars, (who appear in the left side panel of the window), to renovate an old chapel that had fallen into ruins.  The chapel’s name was “Our Lady of Good Counsel”.

It happened that on April 25, 1467 at about 4 in the afternoon, while the townspeople were enjoying a festival in honor of the Feast of St. Mark, a bright cloud descended as many townspeople looked on (depicted in the right side panel of the window).  The cloud descended and rested on the unfinished walls of the old chapel, and as the cloud dissipated, the image of Mary holding Jesus was revealed.

Word of this miraculous event quickly spread to the surrounding towns, as well as to Rome, where DeScalvis and Giorgio were desperately trying to discover where the cloud they had followed for so long had disappeared to.  Upon hearing of the miraculous appearance of a painting of Mary and Jesus in Genazzano, they immediately went there and identified the image as “the Virgin of Scutari”, an image forever more to be known as “Our Lady of Good Counsel”.

Please click on www.virtusonline.com/virtus to go to Protecting God`s Children web site. Use this site to learn more about our church`s efforts to protect all of our children from sexual predators. If you have not attended a session (required for employees and volunteers with contact with minors), you are encouraged to register for a session by clicking on “registration” and following the steps. Syracuse is your diocese and OLGC is your site if you are a member of our parish.

Parish registration forms are available below or may be obtained by calling or visiting the rectory office.

Our Lady of Good Counsel Parish

© 2016 Our Lady of Good Counsel ParishFreshySites